How do I Integrate my Christian faith with day-to-day business practices? #1 Shift Your Paradigm 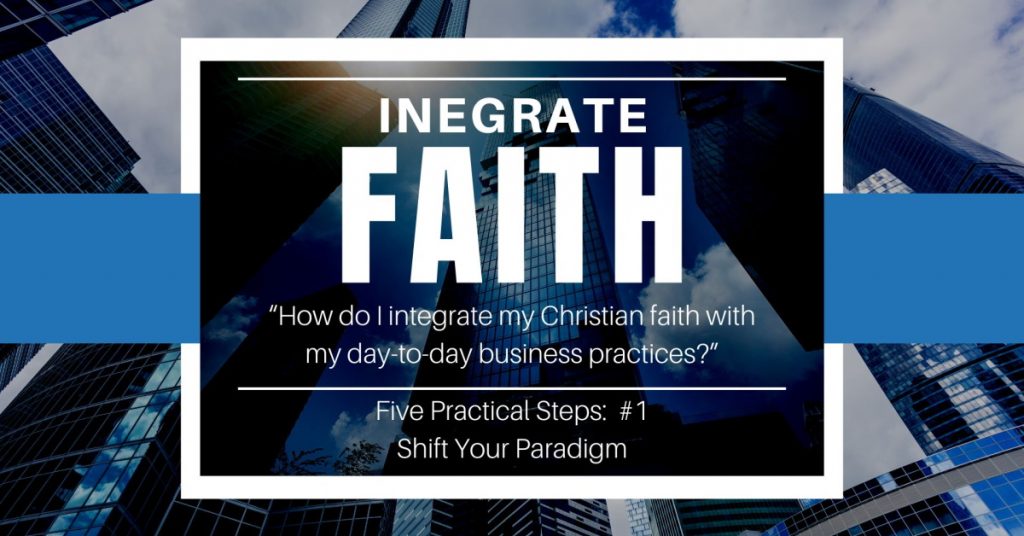 How do I Integrate my Christian faith with day-to-day business practices?

“How do I integrate my Christian faith with my day-to-day business practices?”

That’s a question that almost every Christian considers from time to time. And, while that question may have been seen as mildly important as we mused on it several years ago, the rapid deterioration of our culture has suddenly injected it with an ASAP urgency.

It was a lifestyle to which many of us adhered. Call it comfortable compartmentalization. It was the spiritual status quo. It meant that we got by being somewhat involved in church on Sundays and doing no grievous wrong during the week.

In the last few years, all of that has changed.  Today, we are living in the world which has risen out of 40 years of comfortable, arms-length Christianity.

A couple of decades of spiritual compartmentalization have brought us to the point where our religious freedoms and values are clearly under attack by a widening coalition of left-wing politicians, complicit media, social media moguls and hordes of anonymous social media pundits.  Any half-way literate person can’t help but notice the rapid decline in Christian influence in our culture.

You may recall that Obama opposed gay marriage when he took office.  It took about ten years to go from that to the point where transgenderism is being promoted at the federal level, rational thinking is ignored, and the rule of law is being supplanted by mob rule.  If these trends continue, the next ten years will find Christians persecuted in this country.

Ten years ago, we may have thought, “How do I integrate my Christian faith with my day-to-day business practices?”  because we had a mild sense of obligation.  For the most part, it was a nice idea we thought about from time to time because we felt a bit of a sense of obligation. But, no real urgency, and we were content to build our businesses and careers and keep them separate from our involvement in the local religious institution.

Today we ask the question because we realize that if we don’t do something, we may not be able to practice our faith in the near future. If something doesn’t change, we will have been the last generation to openly practice Christianity.  Our children won’t have that luxury.

Our motivation now is to insure a reasonably free existence for our children and grandchildren and the survival of the country.  The question is no longer an academic musing, but rather our knee-jerk reaction to the realization that we have lost the culture and may lose everything else if we don’t act.

The mildly intrigued academic question of ten years ago has become the make-or break response to a world turning increasingly dark.

So, how do we integrate our Christian faith with our day-to-day business practices?

The answer isn’t simple, and it varies from time to time and place to place. In an effort to shed some light on it, I’m going to do a short series of articles on it. This is the first.

Where do we start?

The Apostle Paul gave us the direction:

And do not be conformed to this world, but be transformed by the renewing of  your mind, so that you may prove what the will of God is, that which is good and acceptable and perfect.

If we are going to make a difference in the world, it has to start in our mind.  First, we think it, then we do it. In 21st Century, Western civilization terms, that means a paradigm shift.

One dictionary defines “paradigm: as a standard, perspective, or set of ideas. A paradigm is a way of looking at something.

When we shift our paradigms, we see things differently. And, since we see things differently, we think differently and act differently.  For example, if we were raised in an abusive home, we might have acquired the paradigm that says, “people of the opposite sex are inherently manipulative.”  That paradigm colors all our thoughts, interactions and relationships with the opposite sex.  It’s almost impossible to act positively when we are burdened with a twisted paradigm.

The paradigm that says Christianity is about church has to change. When we shift that paradigm and begin to see that Christianity is about every aspect of our lives in subjection to Jesus Christ, that new paradigm frees us from the idea that holds us to an institution and allows us to think more clearly and more creatively about the marketplace. When the blinders come off, we’ll see opportunities all around us.

Until we make that paradigm shift, our efforts to live our Christianity in the day-to-day practices of the marketplace will be like paddling a canoe upstream.  You can make some temporarily progress, but you are ultimately doomed to be overtaken by the forces around you.

If you are going to live out your Christianity in the marketplace, you must first change your paradigm.