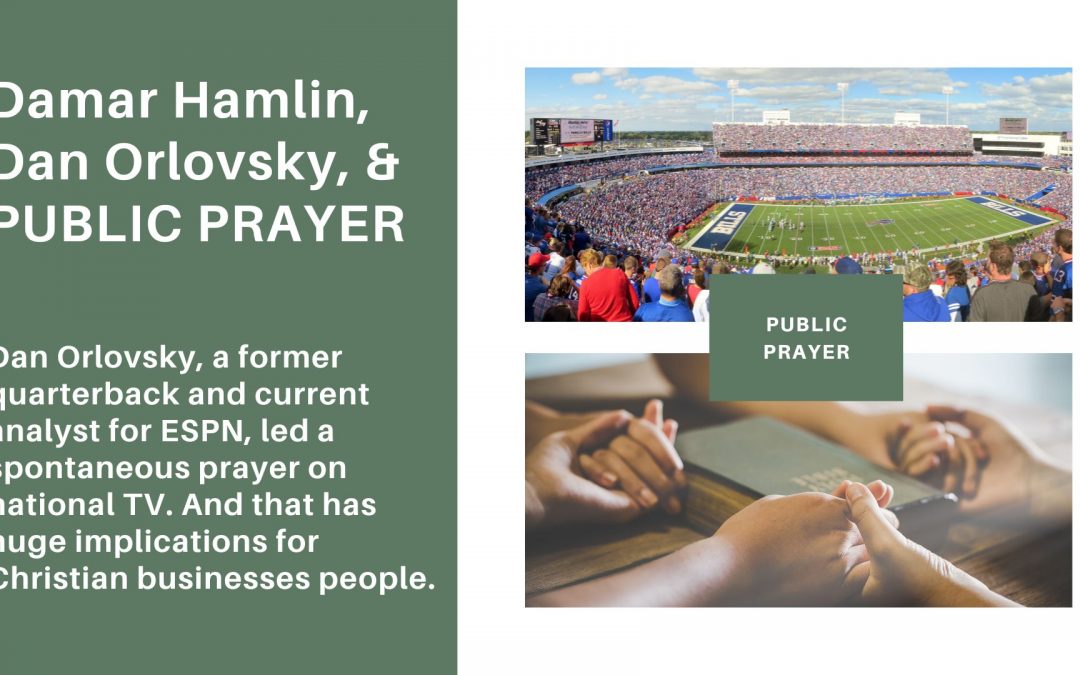 Is This the Tipping Point for Christian Businesspeople?

In case you have been living in isolation the past few weeks, here’s a recap of the incident.  In the middle of an important football game, Damar Hamlin, a young defensive back, tackled a ball carrier.  He stood up and took a couple of steps, and then collapsed.  Medical personnel were rushed in and he was given CPR to resuscitate a stopped heart. It was a life-or-death moment. The players were deeply touched, and a number of them were seen in tears for their colleague. The incident lasted maybe 15 minutes and the game was subsequently suspended.

The announcers and analysts for the networks televising the game had to fill in the time. Every one of the commentators I was watching remarked repeatedly that all we could do was pray.  Dan Orlovsky, a former backup quarterback and current analyst for ESPN, took it one step further, and verbally prayed for Damar.  At the time, it seemed to be a natural reaction on Orlovsky’s part, and not at all out of order. (See it here: https://www.youtube.com/watch?v=pk9TwonTnCM).  In retrospect, it was a remarkable, sincere, heartfelt and natural response to a calamity. The responses were overwhelmingly positive and supportive. One person commenting on the video said:

“The fact that he was willing to do this on one of the biggest and most publicized channels in the country is just unbelievable.”

But more importantly, it broke the unspoken taboo against praying in public that has held back millions of Christian businesses people who have been hesitant to verbalize their relationship to Christ in the marketplace.   As one commentor noted:

“I’m crying right now. This might sound crazy, but this may be monumental moment in the Christian community. Dan, thank you for having the courage to pray openly in a forum that doesn’t always appreciate/acknowledge religion. This was true Christian leadership and am thankful for you and praying for you as well. Much love, brother”

In a world where the media most commonly depict Christians as simple-minded, and in which most  businesspeople are afraid to demonstrate their Christianity in the marketplace, Orlovsky demonstrated what it means to be a Christian man, expressing the reality of Christ through a short prayer.

This incident illuminated a fundamental truth universal to mankind:  When events seem out of our control, we turn to the Creator.

The dam has been breached, and the ripples of impact are spreading.  On Saturday, I watched a NFL game, and the players and coaches of both teams came together and formed a large circle before the game and prayed together.  NFL players routinely get together after the game with their colleagues on the opposing team, form a small circle and pray together.  That has rarely, if ever, been televised.  Yesterday, it was.

If ever there were a country in need of God’s healing love, manifested in the prayers of His people, it is this country in this time. Orlovsky’s prayer was the tipping point. The overwhelming positive response and the change in the media’s attitude point to a pent-up yearning for a relationship with the Creator.  There are millions of people looking for an answer to the adversity and uncertainty in their lives, and Orlovsky’s prayer set the example.

Now, it is up to the millions of silent Christians in this country – Christian businesspeople in particular — to pour through the breach in the dam,  accept our responsibility to be verbal about our God, and spread the reality of the presence of God into the communities and marketplaces we inhabit.

We can no longer be silent observers, afraid to acknowledge the role of Christi in our lives.  Millions of people are seeking some one to point the way.  The time to step up is now.

The ball’s in our court.