Which takes priority in your organization? The success of the organization, or the welfare of the people within it? 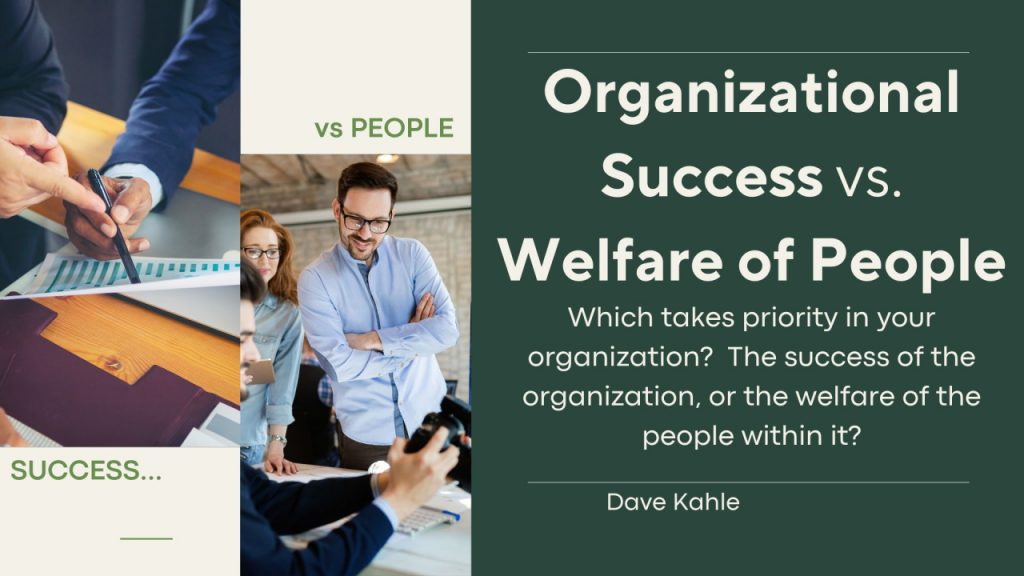 It’s a common predicament Every professional and every business executive will regularly confront situations in which they’ll need to sort it out.  Which is more important?   The need to build the organization on one hand, and the responsibility for the wellbeing of the employees on the other.  There is often a tension between these two sides.

It rarely manifests in such heady terms.  Typically, it takes the form of a decision about terminating an employee.  Should you bend over backwards to try to salvage this employee, even at the expense of an unduly large investment of time and money, or do you make a quick decision to wipe the slate clean, even if it means that employee will be  left with no income and a questionable entry on his/her resume?

One of the members of one of my peer groups brought this story.  His company dealt with hazardous materials, and so had evolved a stringent anti-substance abuse policy.  Employees were randomly tested. A positive test led to counseling.  A second positive test was an automatic termination.

One of his employees had just tested positive for the second time.  What seemed like a simple decision turned out to be considerably more complex, when he shared that the employee in question had been with the company for 15 years, was the owner’s cousin, and was suicidal.

Our group talked it over and eventually arrived at a recommendation that can offer an approach to dilemma. We recommended that he fire the employee for the good of the business (you can’t have someone under the influence of drugs handling hazardous materials), and for the example it sends to the other employees.  His stewardship responsibility for the good of the organization demanded that.

We recommended that the process of terminating the employee be done as well as it could be done, with respect for the dignity of the individual a significant part of the process.

And then, we recommended that the owner make a date to take to take the ex-employee to lunch and offer to help him in any way that he could. And that action represented at least a partial fulfillment of the owner’s shepherding responsibility for the individual.

Under the circumstances, it was a resolution that combined the shepherding responsibility with the stewardship obligation.  The solution was not characterized by “either/ or”, it was resolved by “and.”

In this case, instead of asking, “Which is more important, stewardship or shepherding?” the question was, “How can I do both?” Changing the question led to the solution to the conflict.

One of my other clients had a software company which employed programmers working from their homes.  One particular programmer was consistently not measuring up. After several warnings and unsatisfactory performance improvement plans, he made the decision to terminate the programmer.  As a steward responsible for the wellbeing of the organization, my client understood that his small company could not afford the economic burden of an unproductive employee.

But what about his shepherding responsibility for the well- being of the employee?  Thinking in terms of both stewardship and shepherding, he drove the three hours to the programmer’s home, and brought the news in as gentle and dignified way as he could, extending the severance pay beyond the company’s previous practice.

While the resolutions in both of these incidents may not have been perfect, they illustrate real people dealing with real issues and attempting to stay true to the concept of both stewardship and shepherding.

“And” instead of “or” can make all the difference.