Five Practical Steps #5: Emphasize Excellence | How do I Integrate my Christian faith with day-to-day business practices? 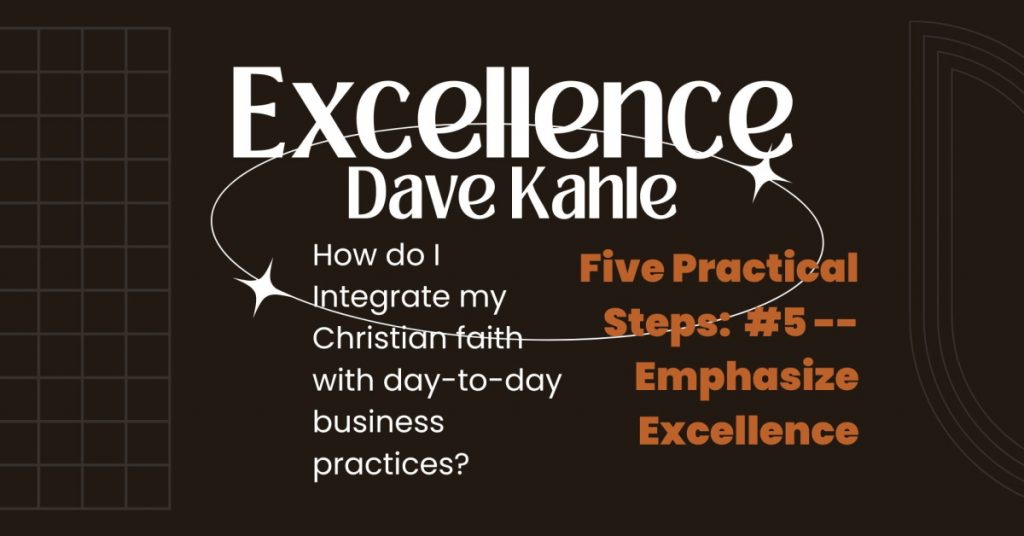 Shortly after I became a Christian, I interviewed for my first professional job.  The manager to whom I would later report mentioned that the territory was open because the previous salesperson had falsified call reports and been fired for a lack of honesty.  I jumped in, declaring my newly found faith and its emphasis on integrity, assuring him that he would have nothing to worry about with me.

Later, in de-briefing the interview with the recruiter with whom I was working, the recruiter shared that my interviewer had seen my declaration of Christianity as a negative and was afraid that I would use my position to proselytize my customers. It was my first experience with the conflict between the world’s expectations and my faith.

I didn’t know what else to do, so I prayed and asked God for direction. And, in a flash I received – nothing.  God was not going to bail me out with a simple and direct strategy.  Rather, he was expecting me to dig deeper for the answer.

My initial thought was “This is going to be tricky.”  Finding your way in a world which emphasizes results, worldly accomplishment, money and success while coming from a perspective that puts God’s Kingdom at the zenith – that’s tricky.

And, while I certainly haven’t gotten it all figured out, I’ve spent 35 years working on it, and have acquired some insights.

I’m assuming, of course, that you have matured enough in your spiritual walk to even consider the question.  The vast majority of Christian business people have never considered the question because they have not yet made the paradigm shift to go from compartmentalized thinking – “My Christian faith is about going to church on Sundays and my life Monday – Friday life has nothing to do with it”– to understanding that your career and your business belongs to God, that he provided them to you and that he should be the general partner of your business and the immediate supervisor of your career.

If you haven’t yet made that paradigm shift, then the question is irrelevant to you.  If, however, you are a Christian, active in the marketplace at a professional level – salesperson, manager, executive, professional — and you understand that your job/business/career is your ministry or, that you should at least be trying to integrate your Christian faith with your day-to-day work, then you are searching for ways in which to do that.

Once you’ve made that big shift in your paradigms and come to understand that your business or career is not yours, but rather belong to God, you are faced with an immediate problem: “ How do you focus on living out your Christian faith when the world (and your employer and customers) demand results?”

This is the fifth of a series of posts I’ve done, each proposing a principle, practice or tactic to answer the question.

In the first of these posts, I identified the essential first step:  Shift Your Paradigm.  In the second, the next: Pray more and pray more intentionally. In the third, I unpacked: Seek to live out the fruits of the spirit. In the fourth we looked to look at the key practice of:  Prepare your personal testimonies.

This is the next in this series of things I’ve learned about integrating my faith with my day-to-day job in the marketplace:  Focus on process, not results. Here’s how I first discovered this principle.  In my earlier life, I was a salesperson and actually had seven different sales positions.  I was successful in all of them – twice becoming the number one salesperson in the nation for two different companies in two distinctly different selling situations.  And, in almost all of those positions, I was given quotas and goals which were designed to motivate me to produce the results the company’s wanted.

But here’s the secret – I never paid any attention to them. OK. I looked at how I was doing from time to time for financial planning purposes, but as far as being motivated by them – I was oblivious.   Instead, I focused on doing everything I could ever better. While I didn’t have the sophistication of thought back then, what I was doing, albeit subconsciously, was focusing on the process, not the result.

I wasn’t motivated by hitting the results – I was motivated by the sense of fulfillment I got when I did everything right – created the relationship with the customers, uncovered the opportunities , dug deeper into understanding them, presented attractive proposals, serviced the business well – and did that with an ever-growing set of customers.  It was the nuts and bolts of B2B selling.

In my next career as a sales consultant and sales guru, I had the time to reflect on some of my experience and draw lessons from them.  It occurred to me that one of the reasons I was successful in every sales job was that I focused on the process, not the end result, and by continually focusing on doing the right things, and doing them well, I produced exceptional results.

Today, looking at that same experience through with my Christian world view, I realize that God had given me at least a partial answer to that early prayer. One of the ways that you can integrate your Christianity with your day-to-day activities in the marketplace is to focus on the processes and let God take care of the results.

Do the right things and do them well. That’s a lifetime challenge for every professional position.  Your boss will be pleased with you, your customers will reward you and you will be fulfilling one of the guidepost scriptures for businesspeople in the market:

Whatever you do, work at it with all your heart, as working for the Lord, not for men, since you know that you will receive an inheritance from the Lord as a reward.  It is the Lord Christ you are serving.

It may be tricky, but it is certainly possible.