What Is Real Ministry? 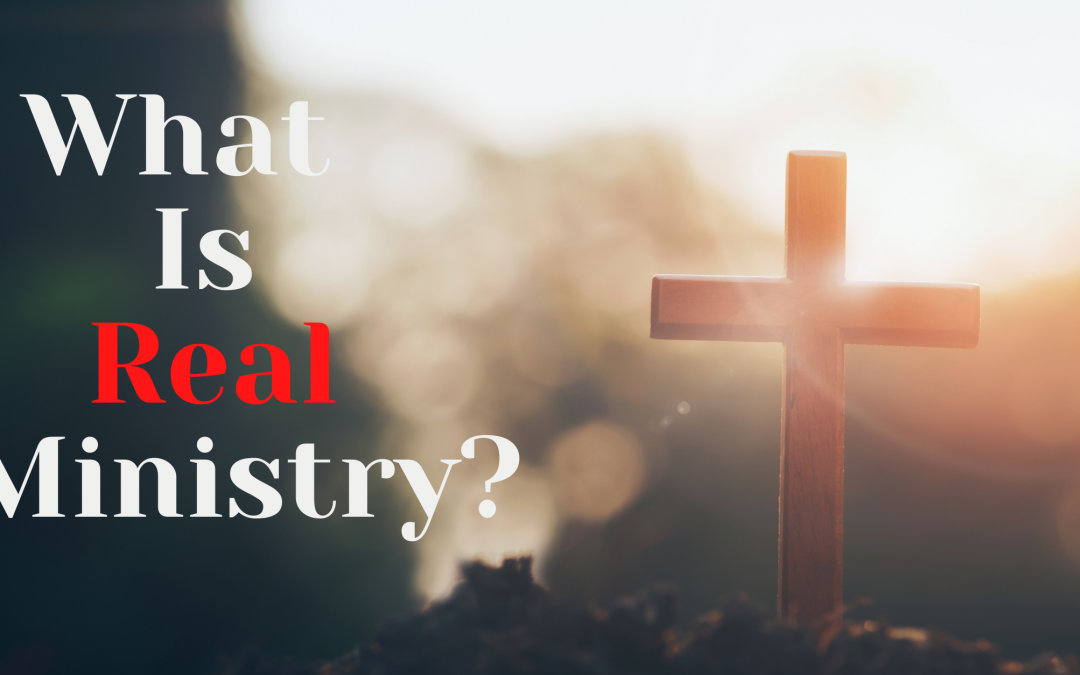 Real ministry is only done under the auspices of established religion.

The problem with it is twofold:

First, it is not biblical.

Second, the impact of believing it is devastating.

The Biblical Position of Ministry

The Scriptures teach that no work is better, more blessed, or more holy than any other. Whatever you do, whether it is under the auspices of organized religion or not, is important because of for whom you do it, not what you do.

Whatever you do, work at it with all your heart, as working for the Lord, not for men, since you know that you will receive an inheritance from the Lord as a reward. It is the Lord Christ you are serving. (Col. 3:23–24)

Whenever we create a word to describe something, like “ministry,” by that simple act, we imply the existence of things that are not that thing. For example, if we say that we are “Americans,” that statement implies that there are other folks who are “non-Americans.”

When we hear pastors proclaim that the church building is “God’s house,” that implies that everything else is not. And therein lies the problem. When we hold some work apart as being a ministry, we are in effect saying that all other work is not ministry.

When we say that “ministry work” is special, we are, at the same time, saying that all other work is ordinary and not special. When we say that true ministry is only done within the auspices of the organized church, we say that it can’t be done outside of it. And when we do that, we remove God and his power from all work that doesn’t fit established religion’s definition of ministry.

For a Christian, there is no such thing as work that is “non-ministry”—except that which is sin. Everything done in service to our Lord—every thought we think, every breath we take, every action we make—is either service to the Lord or sin.

The practical effects of believing this paradigm have been devastating. Unfortunately, countless millions of people have lived lives that have been narrowed and hemmed in by this false idea. There are thousands of Christian businesspeople who hold onto this false concept of ministry. Since some things are “ministry” and some are not, so the thinking goes, then their businesses are “not ministry” and are relegated to the world of the ordinary, nonspecial “everything else.”

These Christian brothers and sisters are, therefore, hindered from seeing their businesses as powerful, holy entities in the forefront of the Kingdom’s advance into every nook and cranny of the economy. Millions of people have not looked for God in their work. The idea that God instituted work as the first place where he would interact with them remains hidden to millions. We haven’t seen that truth because we haven’t looked for it. We haven’t looked for it because we’ve believed bad ideas.

The net impact of this paradigm has been devastating to the Christian faith. According to researcher George Barna, the institutional church system has spent $530 billion dollars on itself in the past couple of decades and has not increased the percentage of Christians by even one percent. And, in recent years, we’ve seen a decrease in the percentage of Americans claiming to be Christians.

In what world would we allow an entity to burn through $530 Billion dollars and actually lose market share?  It defies common sense.

What an incredible waste of gifts, talents, time, and energy! Satan must love this idea. Look at all the power of the Holy Spirit he has hindered and kept contained over multiple nations and many generations. It must be one of his favorites.

We need to take this idea—that business is just about money—pry it off, and discard it in the trash.

Prayer:  Lord, thank you for the instructions and examples you have given me in your word.  Thank you for the power of the Holy Spirit to illuminate my life and bless my businesses. Help me to discern the ideas and paradigms that I have nailed over his light to hinder his activity in my life.  Then, Lord, work with me to remove those hindrances so that his light can shine even brighter in my life and my business. Today, Lord, I confess that I have held onto the idea that real ministry is only done under the auspices of established religion. Help me to discard this idea so that I can unleash the power in my business to be a mighty force for your Kingdom.

This post was excerpted from  The Good Book on Business, 2017, by Dave Kahle